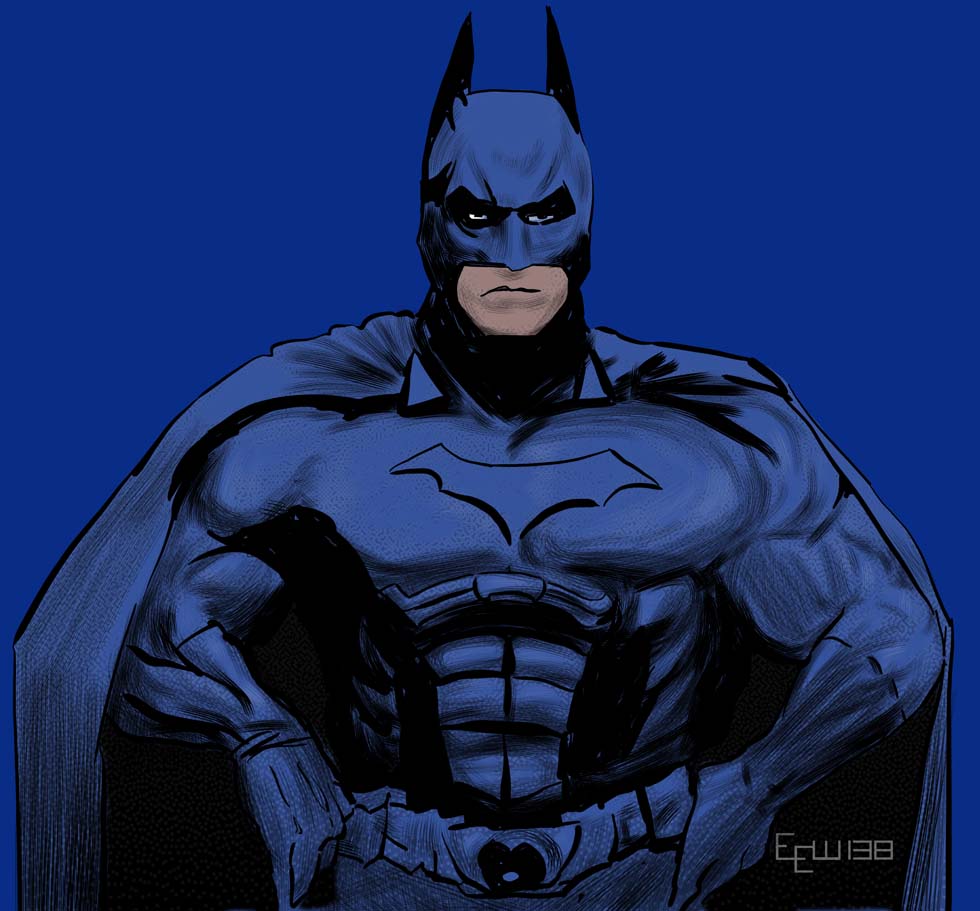 Most moviegoers pinpoint Christopher Nolan’s “The Dark Knight” as the film that changed the superhero genre, but it was Nolan’s “Batman Begins” that laid the groundwork three years earlier for the genre’s move toward “dark and gritty” realism.

Wait a second on that "changing the superhero genre" statement. A few points need to be made, best accomplished by a historical review:

It's worth remembering that director Tim Burton kicked the superhero genre into high gear because of the gigantic box office of the first Batman (1989), a case of Hollywood swooping in at just the right moment to take advantage of the momentum created by the sales and critical acclaim that came from Frank Miller's Dark Knight Returns.

Miller's comic reset the world of Batman, detaching Batman from an enormous amount of past Batman comics and Superfriends cartoon continuity by (ironically) returning Batman to his original version from 1939 (though not completely, which would have meant Batman hurling crooks off rooftops and occasionally wielding a pistol). Burton's film picked through Miller's ideas and moved pieces of it onto the screen. The 1989 Batman film also had the perfect timing of a generation of kids who had watched the cartoon show version of Batman in the 1970's now old enough to buy tickets for this far more darker and serious version. (Batman was hardly the only character to get darkened in the 1980s, that was a phenomenon all across the heroic side of pop culture in that decade. The success of the Dirty Harry movies, and its imitators, from the 1970s, cleared the way forward for a pulpier version of just about any character that threw a fist or pulled a gun.)

But, as far as superhero films go, Batman 1989 was just a second major step forward, because the first step was the huge success of the Christopher Reeve's Superman (1978) which made $300 million in box office, and when considered by comparing with inflation of ticket prices, translates into roughly $1.2 billion to $1.5 billion in 2020.

Superman* showed that comic book characters could generate serious box office numbers, and that's not counting all the ancillary sales with toys and other consumer items, something that helps fuel the superhero boom in a way that only Star Wars and the world of kid's movies can compare with.

The advantage Tim Burton had when he was making Batman was not needing certain kinds of difficult (as in difficult to make believable) special effects because Batman doesn't fly or have powers that required more than just effective, gloomy lighting and talented stunt men to throw punches and leap downward (though, with a little inspection, you can tell the stunt doubles are descending on wires). Costuming and mood were essential for Batman and that's an area Hollywood had conquered long ago.

This made it easier on Burton who didn't have the challenge of the Christopher Reeve's Superman movies where flying effects were necessary (and what ended up on film was just much better versions of what had been done in the 1950s TV show, an actor suspended from a wire with a powerful fan trained upon him, the actor pretending to hurtle forward). The effect of flying not being necessary for a Batman movie helped a lot, but its something absolutely necessary for a very long list of other comic book superheroes in order to be put on film, a daunting problem in that earlier era of mostly optical effects.

The big change came when computer CGI made it possible for movies to much more closely imitate the feats of the heroes in the comics, the best example of the sudden cinematic special effects leaping the genre forward is X-Men (2000) and Spiderman (2002), both films providing convincing presentations of things central to the characters, such as Spidey swinging through the streets of the city, or morphing body changes of Mystique (which would have been nearly impossible using just stop-action camera effects). With those two films featuring Marvel characters it became obvious what had held up most superheroes from migrating into movies all along, and now that barrier was gone (that is, if you had the production budget to hire the server farms and technicians).

Also worth remembering is the bad taste leftover from Batman and Robin (1997) which created real questions about whether superhero movies could sustain more than brief, irregular bursts of fashion. By the time Batman Begins (2005) appeared, the question had been mostly answered by putting two things together: the historical evidence of the box office of the original Superman and Batman movies, and the new box office of the Marvel films. It was now obvious that not only did people want the characters (from Marvel and DC) but they also wanted relatively faithful versions** with convincing effects portraying what for 70+ plus years could only be shown on comic book pages, and Nolan made sure to cover that part of his presentation effectively.

Batman Begins brought the DC Comics world out of its cinematic coma, and director Chris Nolan's hard-headed rational take on the character was an upgrade that fit the era, and was a firm departure from the earlier films, with the clowning around now done with Nolan's veiled sense of humor versus the outright buffoonery of Joel Shumacher.

But what Batman Begins did was something even more far reaching: it caught DC up with Marvel, even though at that time it was 20th Century Fox and Universal making the movies with Marvel's characters. When The Dark Knight and Iron Man came, it set up Marvel to really start taking the steering wheel (as DC was already doing) for their side of the comic book world, and between the two they had created a movie theater audience ready for the next leap forward: superhero team movies with The Avengers (2012).

Just like the original publishing history of comic books, the accumulated success of single character books made the pathway to the "team books," and in the same way without the films Superman, Batman, X-Men and Spiderman preparing the audience, and fine-tuning the technology that goes into creating the visual world of the superheroes, Avengers and Justice League, et al, would not be possible.

The DC characters made single character superhero films viable, but Marvel has engineered two important moves forward: the team films, and introducing the interconnected world of separate character movies plugged into the team books, both types moving along a major story telling plot line revealing a larger overall story. Whether this will allow for even more invention later, or becomes a stifling structure (like may be the case on the DCU films which have stumbled trying to get cohesion and success at the same time) is yet to be determined.

*In a very real way, Superman 1978 had a temporary advantage that is now gone. A vast generation of people from the 1930s to 50s were buying tickets for this familiar pop culture hero who was an enormous innovation with tremendous impact in their childhood years. That lingering memory helped in 1978 to sell tickets (a similar phenomenon helped the musical Annie), but is a clear deficit when a Superman film goes into a theater today, as that previous audience is mostly gone, and Kal-el must now appeal to an audience with a different set of memories for the character. Burton's Batman film from 1989 had the special situation of not only new fans from the Superfriends and Frank Miller's Dark Knight Returns, but also the lingering effect of the Adam West TV show from the 1960s. The average person in a 1989 film audience, even if completely unfamiliar with comic books since childhood, would have known Batman for much of their lifetime via that ABC series.

** A certain faithfulness to the characters seems required to make it succeed, as if the audience, even when unfamiliar with the character, can smell Hollywood deviation from what ought to be there. For example, witness the disaster of Catwoman (2004).

The Nolan brothers enfuse the story of Bruce Wayne, his parents murder, his adaptation of bats as his disguise of choice, and his training in the League of Shadows (with Ras al Ghul doing the teaching) with a mixture of humor, action, pathos and a completely rational approach to making all the batgear work. This approach, which is almost exactly the upside-down version of Joel Schumacher's Batman and Robin, performed well at the box-office and set the stage for the billion-dollar grosses that came with The Dark Knight and Dark Knight Rises.