is the Bat Suit funny looking?

And the Mask of the Phantasm 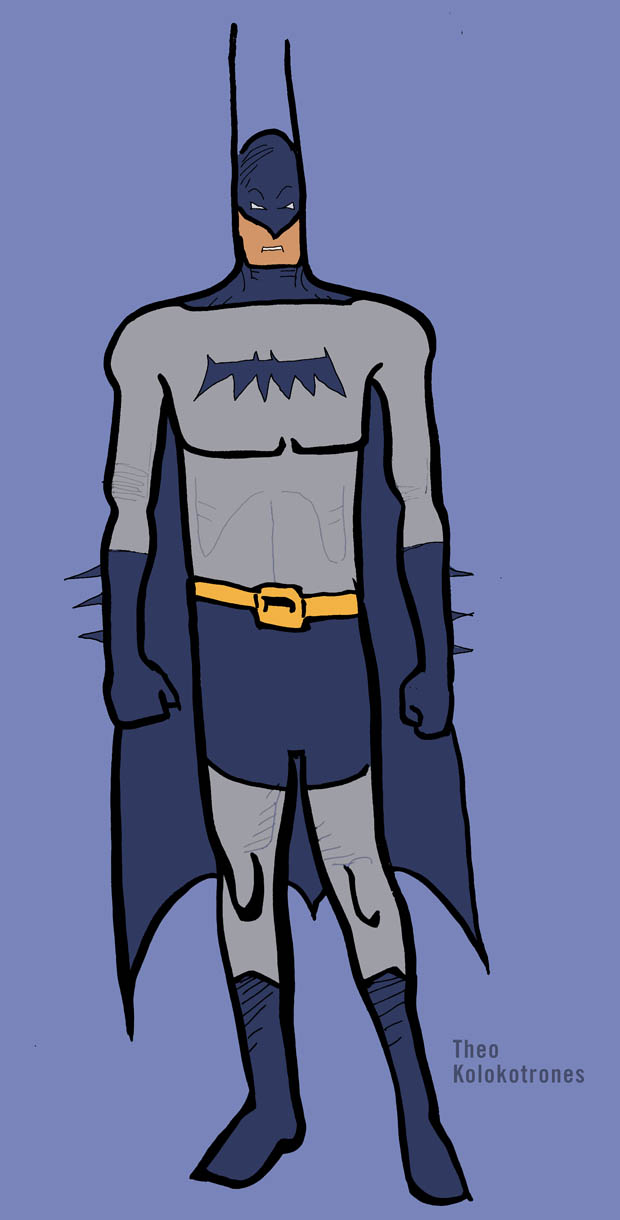 Do I look goofy to you?

The Question of the Bat-suit, and is it funny looking?

Interesting take by writer Joshua Rivera on an animated film which often shows up as a favorite, or even the favorite, of all Bat-films with Bat-fans.

... Mask of the Phantasm dives into something that The Animated Series never did, by design: Batman’s origin. And despite being tucked into a far-too-brief 75-minute film, it’s the most well-rounded portrayal of the character’s beginnings, because it’s willing to portray Bruce Wayne as earnest and corny, someone that’s a little ridiculous. The Bruce Wayne of Mask of the Phantasm’s flashbacks isn’t taken seriously by criminals; he’s overzealous in his vigilantism, so convinced of his own fierceness he ends up being more funny than intimidating.

Concerning the suit, the live-action films do their best to make the suit either fearsome (as is done in the comic books) or try a kind of work-around the issue of visual identity by making the suit a utilitarian suit of armor.

But, any superhero suit faces this dilemma, looking goofy and or ridiculous. But ultimately, it is the actions of the character that defines the suit within the story.

This actually reflects how humans understand things. The military and ceremonial uniforms of various cultures can look pretty silly to someone from another land, but have a rich and serious visual identity to the people of the place from where they've sprung. A closer to comic books example are clowns, which are made up in such a way to provoke laughter, however, the phenomenon of the "evil clown" isn't just a few tweaks on a clown suit to make it scary, it is that a "scary clown" (doing scary things) redefines the standard, classic funny clown into something, well, scary.

Actions are defining, and the understanding of appearances plus actions defines the superhero suit. Capes and wearing your underwear on the outside of your pants is only silly for as long as the person wearing it can be taken for a joke, soon as the bodies start hitting the floor the superhero in a fantastical get-up literally changes the definition of the goofy suit into something frightening because by violence it has shifted it into an emblem of something dangerous (i.e., to criminal kind. For example, originally, Batman was on a war of extermination against criminals, which projects a whole different realm of danger beyond the more typical Defender of Gotham handing captured crooks over to Commissioner Gordon).

The Batman suit was intended to be scare-invoking, and of course in a comic book it is easier to provide this (mostly because we are shown criminals freaking out in terror when confronted). In a live action film, though, the audience has to also be convinced, not just the characters on the screen pretending reactions. Beyond the art direction and costume design, there has to be the presentation of a reasonably strong situation in which a criminal's terror at being confronted by a guy in a bat suit is believable as truly terrifying. There's been varying levels of success with this in the live actions films, most of them short-changing how it is a costumed Bruce Wayne systematically beats up a city's criminal class, and by doing so makes them dread running across the guy in the funny suit. A brave filmmaker could start off his tale with criminals laughing at the getup, risking that the audience might fix upon that reaction, too. But over time showing the audience how the criminals come to fear and be "triggered" by the appearance of the Batman should also influence how the audience views the suit.

Mask of Phantasm's depth of emotion

Mask of the Phantasm delves more into the emotional life of Bruce Wayne, and in a way acts as a bridge between the Tim Burton movies and the Nolan films. It connects some of what Burton's movies started about Bruce Wayne's inner life, and Nolan's films pick it up again with a similarity to the additions fleshed out in Phantasm.

Part of what Nolan gave us in The Dark Knight seem like a variation on Phantasm, Nolan using standard Batman characters such as the usual Batman vs. Joker (and Two Face) paradigm, while Phantasm used a female lead that isn't part of the usual Batman cast (and in a small way, providing an isolated 'side love story' in the Batman saga, such that it is reminiscent of the role Silver St. Cloud had in Steve Englehart's run on Detective Comics and his "Joker's Laughing Fish" saga).

Mask of the Phantasm enjoys a pretty high reputation with comic book fans for how seriously it takes Wayne's world of conflict and the burden of crime-fighting. Before Phantasm, Burton's Batman movies only hinted at the emotional cost of the career in fighting bad guys, after Phantasm, Nolan's movies made it more of a central element.

Article praising Mask of the Phantasm at The Verge