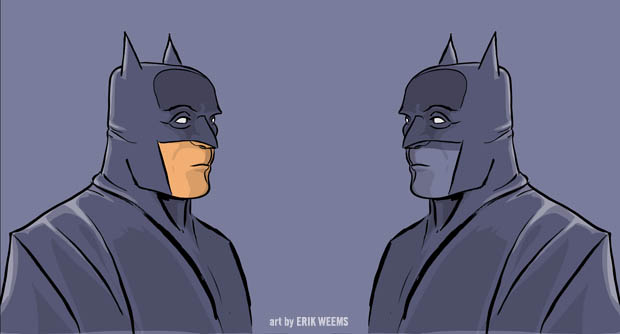 An analysis of the Batman story and character (by Matt Goldberg) at Collider:

....the thorn in Batman’s side is Arkham Asylum’s revolving door policy.

Some may believe that what this really does is raise the question of whether or not Batman should kill his enemies. But that’s like saying because prison breaks occur, we need to increase capital punishment. It’s using a draconian tool to literally overkill the problem. A far simpler solution would be to give Arkham stricter standards and make sure that the building isn't so easy to escape. If Batman is truly brilliant, why can’t he design a better prison?

I believe it’s because he doesn't want to.

A different explanation for the dilemma of Batman/Bruce Wayne in Gotham City is the same one suffered by the Superman character: a being that has become too overpowered beyond the limits of the original story. Greenberg says in his Collider article that Bruce Wayne works on fixing the city by day, Batman works on fixing the city by night, but neither completes the task because Arkham spills out an endless supply of villains to muck up the process.

I can't really address Greenberg's explanation for this situation, which appears to be that the damaged psychology of Bruce Wayne produces this intentional flow of criminality. For many decades Bruce Wayne's psychological profile has been a flexible item and writers have used it to explore Gotham and it's leading billionaire citizen through a 4-color lens.

But the problem of overpowerment is reflected in Goldberg's question of why doesn't Batman just design a more secure Arkham? and this shows what any writer on Batman faces. Originally, Batman was a peculiar oddity moving through Gotham's nighttime, clobbering criminals in a war of attrition. But by adding to Batman's prominence in Gotham as a figure of increasing power it moved the character into a figure of preeminence over Gotham until it becomes a question of why doesn't Batman just use his enormous abilities to simply end criminality in Gotham? (This is a kind of variation on a spiritual question, if God hates sin, why doesn't God just end sin utilizing his cosmic power to do so?*)

Like Jerry Siegal's Superman, Batman's ability has been added to by the writers over the decades until Bruce Wayne is only held back by psychological problems and inner-family conflicts with his bat-family, otherwise Bruce Wayne could invent a bat-device for half of Gotham's problems, and with whatever was left to simply beat up the right people to force a solution. But this to too unreal and certainly spoils whatever mystery the original Bob Kane/Bill Finger character contained as he battled as a street fighter taking down crooks while suffering physically in the process, the old formula being "...he usually lost in the earlier pages and won in the later pages." **

The introduction of supervillains was to match the ascent of Batman as the writers added to his powers, and like Superman, this caused the character to eventually burst out beyond the limits of the original stories (and it's logic***).

Arkham Asylum as a spawning ground for lethal criminals should be enough to have it closed down and /or shipped out of a city as populated as Gotham, but as Greenberg notes in his article, triumph over the criminals isn't Batman's goal, but "...escalation, and it’s escalation that Bruce Wayne needs and desires."

And this combat matches the dilemma of overpowerment: without superviallsins, there's no reason an overpowered Batman doesn't conquer criminal kind.

* The power of the deity is like the power of a parent, and utilized to teach the child toward independence, the restraints provided to prevent self-destruction.

*** The logic of the later Superman is a prime example of overpowerment, for example the classic question of "how does a bulletproof Superman shave his whiskers?"

From an article at variety.com:

"Batman has a new adversary: Batman.

The mayor of an oil-producing city in southeastern Turkey, which has the same name as the Caped Crusader, is suing helmer Christopher Nolan and Warner Bros. for royalties from mega-grosser "The Dark Knight."

Huseyin Kalkan, the pro-Kurdish Democratic Society Party mayor of Batman, has accused "The Dark Knight" producers of using the city's name without permission.

"There is only one Batman in the world," Kalkan said.

"The American producers used the name of our city without informing us."

I notice on the page at Variety that Christian Bale may have had his own name at one time, but he is now identified simply as "The Dark Knight."