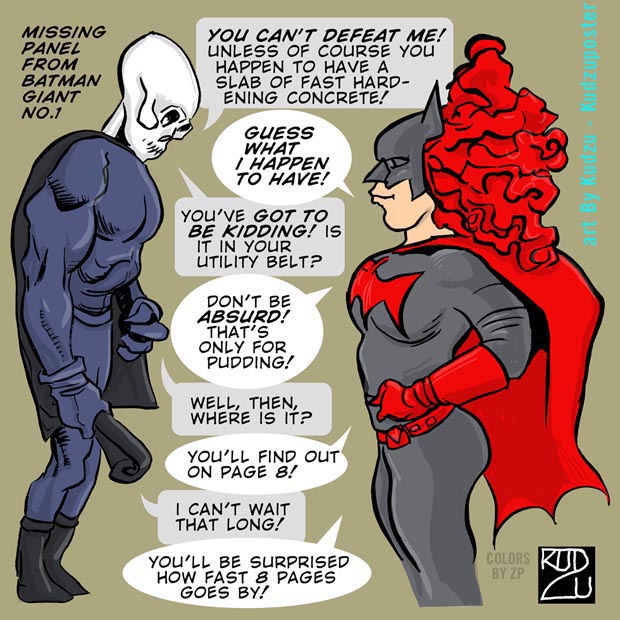 Batwoman is concerned about the due process rights of homicidal killer Lord Death Man, and shrugs off Bruce Wayne's concerns, who, as the short eight-page story unfolds, is cautioning Batwoman, "Lord Death Man can't be killed, Batwoman. Do you think I'd trust anyone else to monitor him?" as his explanation for sending the fiend into orbit (where, it is presumed, monitoring would not be necessary), only to have the capsule containing LDM to crash back to earth right in front of the Wayne Enterprises Building.

This story by writer Steve Orlando is rather rushed, as you might expect for only eight pages. It does provide several basic points: you can't outfight Batwoman, even if you are a deathless creature that survives bullets, getting run over by a motorcycle, explosions and fisticuffs. This still makes you no match for Batwoman's cunning, because she will drop you into hardening concrete, immobilizing you. (How does it get hard so suddenly? It's like Star Wars carbonite instead of concrete.)

While Batwoman is concerned with the fine points of law concerning a proper trial for LDM, the question arises to this reader of whether Lord Death Man would have any legal standing in Gotham City (isn't LDM a Japanese citizen?)

The low point of "Unstoppable" is the absurdity of how communication is carried off in these eight pages. As the story starts, electronic communications between Bruce Wayne and Batwoman seems to be happening via the word balloons emitting from her cape, initially misleading the reader to think someone (it takes a moment to realize it is Batman speaking) is behind Batwoman's cape. This problem is just the limitation from the word balloon designer and placement. The worst example of communication problems is the last page where Batwoman is explaining herself to Gotham Detective Montoya, the two separated by a significant distance, with Batwoman on the upper floors of a building under construction at least a hundred feet away. Around them are police officers using a crane (quite noisy it is assumed) to lift the frozen Lord Death Man and the slab of concrete foundation he is trapped inside of. "I've seen war, Renee," says Batwoman, "The danger doesn't stop when the fighting's over. It stops when you, your officers, everyone touched by an attack can feel a safe again." I wanted Montoya to respond (by mobile phone, I don't see how they can talk over the crane and the distance) and say to Batwoman "feeling safe and being safe are not the same thing," and then maybe shoot Lord Death Man right back into orbit.