Ragged first act but it finally gels before the end

It's easy to hate Star Wars movies if you're either on the outside of the Star Wars fan base or if you're a fan who feels jilted by the direction the Mouse factory has taken Lucas's space opera franchise.

Rise of Skywalker has been accompanied by bad press that heralded the negative reactions of fans and critics, and the lead up to the release date was punctuated by stories over the months which said Disney was recutting the J. J. Abrams film due to bad reactions from test screenings, this being a notoriously bad sign of impending doom for most films headed for their premiere dates.

Whatever the case, this "final" film in the trilogy of The Force Awakens, The Last Jedi, and now The Rise of Skywalker appears to be the final word on the Star Wars saga featuring the original characters (Harrison Ford, Carrie Fisher and Mark Hamill all appear in Rise) and the film is a mixed bag of good and bad. Fortunately the good is mostly wrapped up into the latter half of the film and the bad is on the front end where it can be endured while you're getting a seat warmed up or fetching popcorn, or even napping.

I entered the film with low expectations (courtesy of film review headlines kicking the film in the shins) and I spent the first 45 or so minutes of this two and half hour movie mostly bewildered as it seemed to be tying up threads left over from The Last Jedi, a film I had seen but mostly forgotten. Bad storytelling goofs were littered along the way which were annoying,* but the movie finally got underway and picked up speed, and improved as it went, almost as if what had been the lead-in section was a hastily edited mess by somebody else, but director J. J. Abrams finally overcame him in the editing room and assumed control of the movie.

The crappy story telling disappeared and a smooth and professional** cinematic tale of family trouble (by this point in the story everybody is somehow related to everybody else) was only trumped by the best qualities of all the Star Wars stories, which is that goodness, sacrifice and loyalty beats out the sneaky, greedy grasping of villains. It was Flash Gordon beating out Emperor Ming and I found it somehow moving and impressive by the time the credits hit the screen.

*For example, our heroes travel along the rise of a sandy hillside, come around a curve and are surprised to find planet natives dancing and blasting out their music. How could they be surprised? The Cthulhu headed native party we see is pretty loud and there's no way our heroes, unless they only hear with their eyes, could not have known something big and loud was ahead.

** Another complaint, not about quality but creativity, is how much of the original Star Wars music is cribbed into this movie. It pops up everywhere, and instead of a movie sound track it comes across as a compilation of greatest hits by John Williams. In a way this is just a repeat of Flash Gordon all over again, as its sound track across its thirteen-chapter serial was a compilation of music highlights from other Universal Pictures movies. 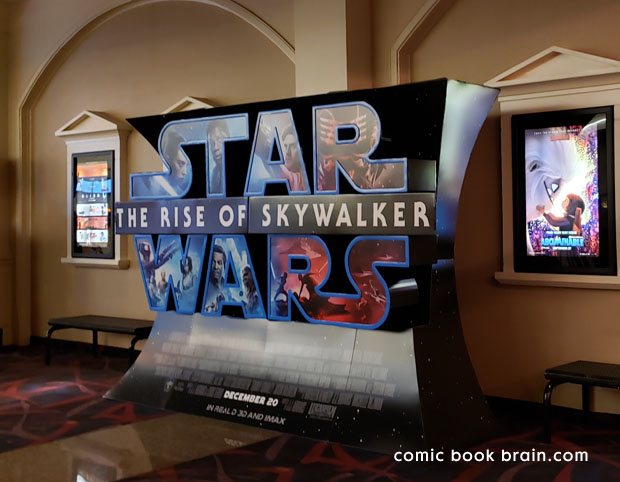