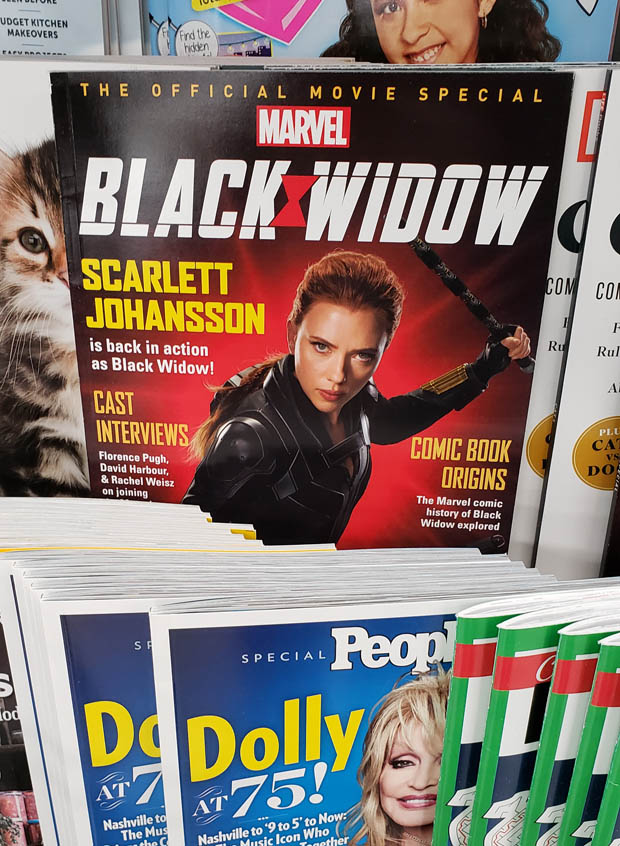 Usually the movie comes out approximate to the tie-in stuff hitting the shelves, but since the pandemic there's been a lot of turmoil in how ancillary product comes out, for example the flurry of Gal Gadot Wonder Woman stuff that appeared last summer, but the release on the actual movie was delayed, moved and did not eventually land until December 25, 2020. It's starting to look like the same thing for that other flashback-into-the-past superheroine movie, Black Widow.

Batmobile (aka "Keaton-mobile") for sale

...road legal replica of the classic Batmobile used in the films starring Michael Keaton is set to sell at auction

Endless number of stories about George Clooney in a bad Batman movie has a new addition:

George Clooney Learned to Seek Out Good Scripts After Batman and Robin - Donning the cape and cowl helped Clooney learn to focus on quality.

Feel good story of the year:

You can get a signed copy of BRZKR from Keanu Reeves, but you may have to purchase 1,000 additional copies to obtain it.

The Multiverse: the streaming wars and DCU vs MCU

The blueprint for interlocking streaming series may be foreshadowed by an experiment on linear TV. Since 2014, The CW has run annual crossovers among its DC superhero properties, culminating in 2019’s Crisis on Infinite Earths — an adaptation of a DC Comics storyline bringing together shows such as Supergirl, Batwoman, The Flash, Arrow and Legends of Tomorrow that also featured cameos from other DC series and movies, including Ezra Miller’s big-screen Flash. “We started with the litmus of, ‘Do we think this is cool?’ But inevitably phrases like, ‘The fans are gonna love this’ and ‘People are going to go crazy’ would seep into our discussions,” says writer and producer Marc Guggenheim. “I think the Venn diagram between what we wanted and what the fans wanted is practically a circle.”

Sort of an overview at Hollywood Reporter

Tom Holland: "I thought I was gonna get fired for Captain America Civil War"

Where the eyeballs are...

That's not the only defense of the film, from 2016: "Batman v Superman Returns Soul to Superheroes - Zack Snyder dares to infuse the comic-book genre with moral and political substance" - by Armond White at National Review

...solely focus on the digital comic book side of the app

The digital service includes the back libraries of Vertigo and Black Label. So far the service is domestic market only, but will probably expand to Europe later - story at Androidpolice

Evening of Feb 23 devoted to getting new Superman and Lois TV show off the ground. The Flash TV show starts up the week following.

"Marvel is magical," and Daniel Kaluuya and Tom Holland - Variety