Many reviews are saying this is a King Arthur movie, which it is in a peripheral way, but if you don't know the background of this ancient "beheading game" tale from a pre-medieval era of England, the film isn't going to make the connections for you.

The Green Knight is moody and highly visual film, stripped down and bare of most of the garnishings of a classic Hollywood adventure story with men in armor swinging swords. Director David Lowery instead concentrates on film hero Gawain (played by Dev Patel) who gets caught up in a bizarre challenge that tests his integrity and humanity right through to the last frame of the movie.

"The Green Knight" himself is a huge, hulking green-skinned figure who looks like a hybrid man-tree*. He arrives on horseback at a Christmas celebration at Camelot, riding his mount right into the middle of the celebration hall where there is a gathering of seated knights before a sickly, aged King and his aged queen wife upon their thrones. Fearfully overwhelmed by the sight, the knights do nothing when this Green Giant issues an invitation to a deadly game. Equipped with a large sprig of holly, and a huge green axe hanging off his side saddle, the Green Knight is faced down by Gawain who is substituting himself for the King who is too aged (and valuable to the kingdom) to be risked in the challenge.

The "game" itself is simple: Gawain gets to take a first swing at the Green Knight, but whatever he does, the Green Knight gets to return the same blow to Gawain. With the Green Knight willingly offering his neck, Gawain swings his sword and beheads the offending party-crasher, sending the bloody head to the stones of the hall and the body collapsing to the ground. For a few seconds it seems like the strange interlude is over, but then the headless body of the giant gets up, retrieves the head and holds it aloft. It then speaks to the hall and specifically to Gawain, "I'll see you in one year at The Green Chapel at which time I will return the blow," and he gallops away.

Gawain (pronounced "ga-one" in the film) now has to not only screw up the courage to go face his doom in one year, but he's got to find the mysterious "Green Chapel" which no one knows the location of, and on top of that, he has to also haul the humongous green axe that was left behind by the Green Knight, the weapon that once it is delivered next Christmas will be used to give the "return blow."

What follows next is Gawain struggling with his previously aimless existence as the nephew of the celebrity-king of the land, getting himself organized enough to ride into the wilderness to search for the Green Chapel. He is advised by many to break his word and forget the whole matter, since keeping his word will surely mean he will die in the process, a either/or decision that torments Gawain.

A series of side stories take place during his journey as Gawain the metaphorical "green knight" is ambushed by bandits where he loses most of his equipment, encounters the ghost of a murdered girl who needs help to regain the location of her head (beheadings in various form populate this tale), and then he continues his quest on foot hauling the giant axe on his shoulder, nagged by doubts and imagining his approaching annihilation.

Director Lowery uses instances of cinematic magic to tell the story by using clever storytelling ruses, though there's also a lot of straight up magical feats shown in the film story itself, and how this power is possible isn't explained at all, with phantom giants crossing the land, a talking and hyper-intelligent red fox providing companionship, besides the already mentioned girl ghost, and there's much more than that.

Magic is also a metaphor for the film narrative itself, being shown by the hand-tricks of a talkative robber in the tale who makes coins appear and disappear in various places (which reminded me of Orson Welles in F for Fake doing the same coin tricks to visually explain how a filmmaker "tricks" an audience). Director Lowery is up to the same sort of tricks in this story and this allows him to both have-his-cake-and-eat-it-to when it comes to the issue of Gawain completing his suicide mission, keeping his word, and solving the problematic question of "honor."

Special effects are mostly up to the task of creating this world, though the limits of the film budget (reportedly $15 million) shows up in places where the CGI is, shall we say, a little rough. Dev Patel is on screen a lot, and carries this movie through each act without ever flagging our interest, providing a movie star performance that is an equal part to the clever film direction from Lowery and the overall scope of the project that updates the ancient story to the 21st century without sacrificing so much it is unrecognizable (though, to be honest, there were parts of the film in which I momentarily thought the film had gone so far astray that if Gawain were real, he should get his lawyers on the phone and start a defamation suit. But Lowery pulls the fat out of the fire and keeps more or less true to the character however much he juggles elements.)

Warning note 1: The Green Knight has a bit of an art film infection and scratches it from time to time. In some places it is a bit more severe. The sometimes bare horizon line visually reminded me of the Fassbender MacBeth from 2015, and both remind me of The Seventh Seal 1957 Bergman movie. These two aren't "art house" films, but they are not American style film making either.

Warning note 2: A hallucinatory scene featuring gigantic humans walking about the landscape after a starving Gawain eats a handful of mushrooms includes nudity. Having this suddenly pass over the screen is like the nude zombie from the morgue suddenly lurching into view in the original Night of the Living Dead. There is also brief nudity earlier in the film during the carousing, drunken aimlessness section about Gawain before the start of his quest in earnest.

* He looks related in some way to Groot of Guardians of the Galaxy fame. 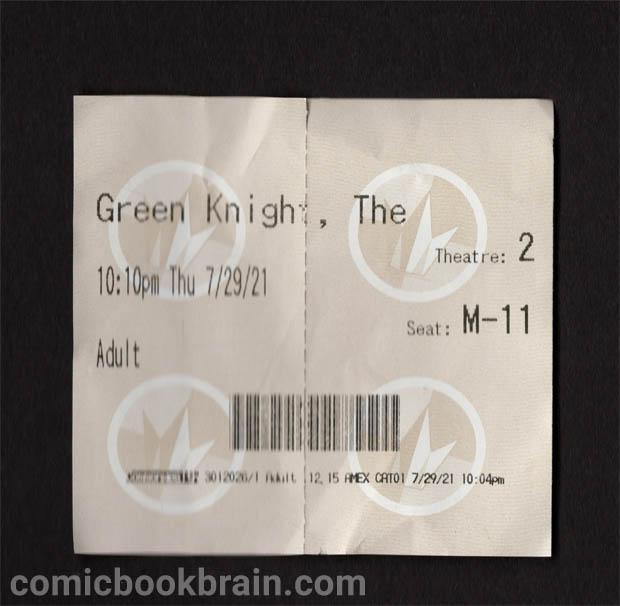