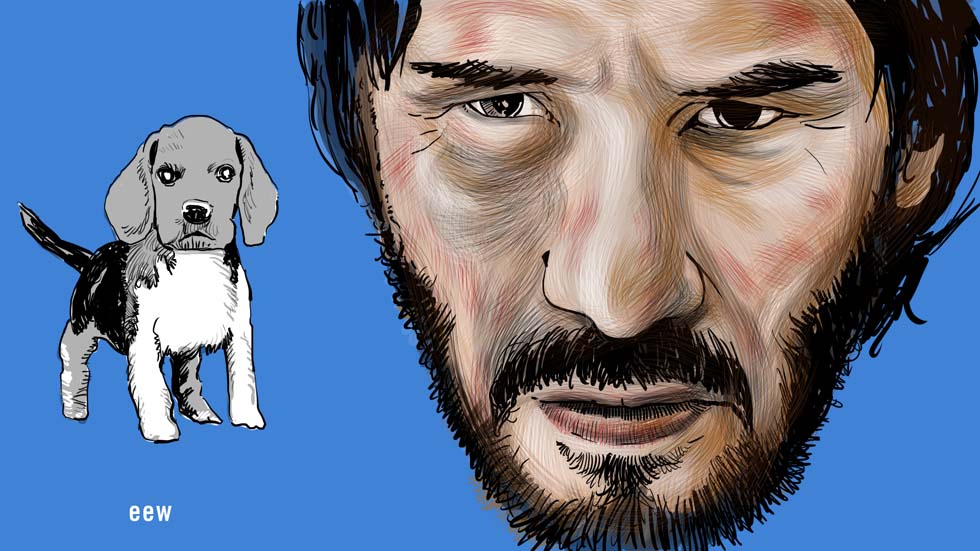 Humor and sadness snipes from around the edges throughout John Wick Chapter 2 as it picks up seamlessly from the earlier John Wick film from 2014. "You killed his dog and stole his car" intones a voice at the beginning, telling us in a nutshell what brought legendary hitman John Wick (Keenu Reeves) out of retirement in the first film, and has set him up for further duties in the sequel when a "marker" is laid against him. This "marker" is in affect a pledge of doing a favor for another person within the criminal trade, and the marker against John Wick is a left over from his earlier criminal career that he has tried (completely unsuccessfully, as it turns out) to leave behind him.

Wick refuses to honor the marker, but this ends up getting his house burned down in retaliation. Thereafter, he forces himself to settle the matter according to the rules of his trade, which means honoring the marker and doing a hit job for the holder, which is Santino D'Antonio (played by Riccardo Scamarcio) who is an odious psychopath. Wick is sent to Rome to assassinate crime lord Gianna D'Antonio (played by Claudia Gerini) who is Santino's sister, much less odious and not alive long enough for us to know if less psychopathic. She holds a higher rank in the crime world, that is, a seat at the "High Table" which is where the main criminal chieftains get together like civilized mass-murderers and rule the underworld.

Stahelski's direction keeps the film blasting along, whether in an inventive (and sometimes comedic) car chase/demolition derby, or when Wick is in Rome and having to maneuver through the ancient catacombs beneath the city in order to reach his target.

Keenu Reeves often stares straight into the camera without expression, and his black-bearded emotionless stare is enough to communicate any number of expressions created by the context of the script (by Derek Kolstad), though there are many places where a short quip is voiced which keeps the dialogue rather short but to the point, allowing for more space for the violence.

The choreography of the combat scenes between Wick and his many assailants and victims is often intricate and lifts the film from mere rapid action movie into something bordering on outright grotesquely violent ballet. The distance needed to make the John Wick story from the two films into a full-blown opera is not far.

Keenu Reeves is of course excellent in this role, stoically enduring any number of slights and arrows of outrageous fortune, and eventually meeting up with Lawrence Fishbourne again, which for most filmgoers will create a reverberation that extends well past John Wick and straight to The Matrix (1999).